Difference between Antifreeze and Coolant
By Theydiffer - February 13, 2017

In terms of car maintenance, the words ‘antifreeze’ and ‘coolant’ are often used interchangeably. While both refer to almost the same substance, there are significant differences between the two. 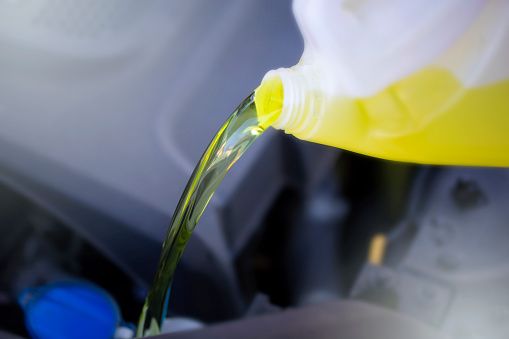 Antifreeze is a liquid substance used in internal-combustion engines. Primarily used to significantly lower the freezing point of fluids, antifreeze works to prohibit the accumulation of ice crystals on radiators.

Since this liquid component is extremely resistant to cold temperatures, it is used for car maintenance during the winter season. Without antifreeze, car engines can freeze up during harsh weather conditions, leading to expensive car repairs.

Coolant, on the other hand, is a liquid substance used to dissipate or circulate heat from one part of the car engine to another. Its working mechanism prevents the engine from overheating.

Ideally, a coolant should have a high thermal capacity. Additionally, it must not directly or indirectly cause corrosion within an engine’s cooling system.

So what’s the difference between antifreeze and a coolant? While both are interchangeably used for car maintenance, there are various differences between the two.

Firstly, antifreeze is one of the components used to create an engine coolant. Basically, a coolant is a 50-50 split of water and an antifreeze formula.

Additionally, antifreeze is crucial for lowering the freezing point of engine liquids. Made with ethylene glycol, antifreeze has a higher performance level, making it ideal for extreme weather conditions. With the use of an antifreeze formula, the formation of ice crystals on the car engine can be avoided.

Meanwhile, a coolant is used to transfer or dissipate heat away from the car engine to prevent overheat. Also, a coolant keeps the engine’s internal parts lubricated.

Although there are significant differences between the two, they are used interchangeably, mainly because the component used to create a coolant is also an antifreeze formula. The only thin line that separates the two is the addition of water in the mixture. Since an antifreeze formula should not be directly poured into the engine, it is packaged and marketed as a coolant.