Difference between Fox and Coyote
By Theydiffer - July 3, 2016

How much do you know about the cousins of man’s best friend? We are talking about the fox and the coyote, of course! They look similar and they live in the wild, in different regions. But how else can you tell them apart? This may be important information considering the fact that people have started adopting all sorts of weird pets and you might need to brush up on your animal knowledge just in case one of your neighbors starts walking one of the two around the block.

A fox is a mammal of the Canidae family. They are small to medium in size (the average red fox weighs 9 to 19 lbs.), they have a flattened skull with triangular ears and a very long and bushy tail. Foxes are carnivorous scavengers and mainly nocturnal. They can live in wild areas as well as near populated, urban areas where they feed on poultry. Foxes have adapted to life in various regions of the world and there are around 12 species of foxes with characteristics adapted to their environment, like the white and thick fur of the Arctic Fox or the sandy colored fur of the sand fox which lives in desert regions. The only place that does not have foxes is Antarctica.

As far as behavior is concerned, they are very playful, and the ones who have adapted to life near human settlements are known to steal things from time to time. Highly adaptable, foxes have always been a symbol of slyness and cleverness. What is more they resemble cats more than dogs, despite the fact that they are in the same family as the latter. Like cats, they have retractable claws, they have whiskers and spines on their tongues and they walk on the tips of their toes.

A particular thing about the fox is the fact that it is the first animal which was proven to hunt by using the earth’s magnetic field, which it can perceive. Foxes are not pack creatures and they prefer to hunt and to sleep alone. However, they are pretty good parents. They reproduce once a year and their litters can be as large as 11 pups, though 6 is more common. Vixens are very loyal mothers and they stay with their pups in the den until they reach 7 months of age. During this time, the male brings them food. The lifespan of a fox is 6-7 years. 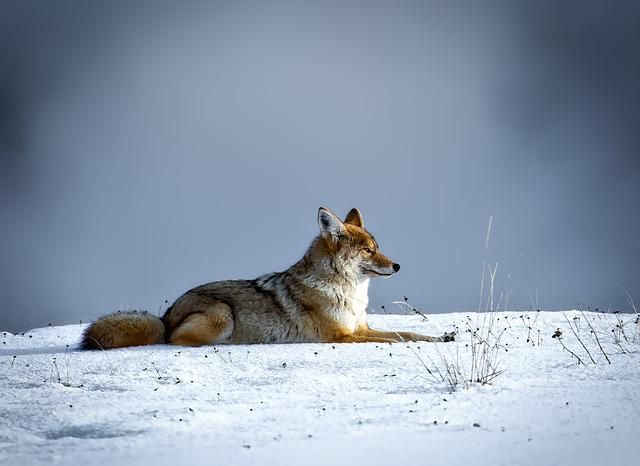 A coyote (Canis latrans) is a close relative to the grey wolf and another member of the Canidae family. It is a versatile and easily adaptable scavenger, smaller in size than the wolf, native to North America and Central America. There are around 19 subspecies of coyote. Males grow to an average of 18 – 44 lb, whereas females grow to 15 – 40 lb. Their fur is short and coarse, with colors varying from light grey to red, with white and black areas. The features of the coyote are long. Even the tracks it leaves are more oval than round compared to other members of the Canidae family.

In Native American folklore, coyotes are seen as tricksters, animals which are both intelligent as well as cunning. And it is this trait which has let them adapt as man has gradually altered their living environment. They are carnivorous animals but they can adapt very fast and kill lambs, poultry and even pets in human settlements; for this reason why they are often considered pests.

The coyote is a family animal. The female gives birth in Spring to a litter of six – twelve pups, which both parents protect and help feed until Fall. Female pups tend to remain with their mother’s pack. Once they have reached reproductive maturity coyotes pair off and mate for several years. A distinctive trait of coyotes consists in how vocal they are. They have a full range of sounds, from growls, yips to whines and howls.

A coyote’s lifespan ranges from six – twelve years in the wild and up to 14 years in captivity. They are prone to several diseases such as tapeworm, mange, rabies, infectious hepatitis and equine encephalitis.

So what is the difference between a fox and a coyote?

Both the fox and the coyote are members of the Canidae family. They are smaller in size and they hunt and live in the wild. However, while the coyote is mainly spread over the North and Central American continent, only Antarctica is left without any species of fox. This distribution and adaptability has led to the evolution of over 12 species of foxes. Remarkable enough is the fact that with a smaller range and even more adaptability, the number of coyote species is greater.

Another similarity between the two consists in the wide range of vocal expressions; however, the most representative one of the coyote is the yip while the fox is not known for any in particular, therefore it shocks with loud screams which few people would know are indicative of them.

As far as hunting goes, the coyote is twice as big as the fox; therefore he can go for bigger prey. However, when hunting rodents and other smaller animals, he pounces and stalks just like the fox does. Their lifespan is similar as well, as is their adaptability to living near humans, allowing both animals to live twice as long in captivity and when they are cared for.