Difference between Hawk and Eagle
By Theydiffer - July 23, 2016

Aren’t you tired of mistaking these two? You know they are two different birds and you know each of them symbolizes something. Mentioned in literature and in movies, hawks and eagles hold a different kind of place in the minds and hearts of humans. They are revered, respected, admired. Let see what we can find out to help us better distinguish between these two birds. 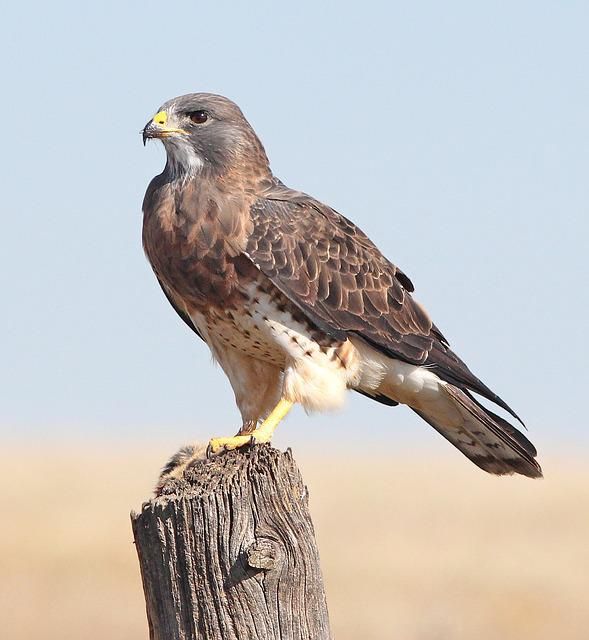 A hawk is a bird of prey of the Accipitridae family and the Accipitrinae sub-family. They are medium sized and they hunt both during the day and at night. The term “hawk” is used by some authors to describe a wide variety of raptors. Their most impressive features are their keen eyesight and their hunting abilities. A hawk can see an object 20 feet in front of it with great clarity. They are very agile and intelligent creatures. Hawks are used in “hawking” and “falconry”, a hunting activity in which small game is caught by birds of prey.

There are around 250 species of hawks, of which some are already endangered as they have been hunted by humans. The average lifespan of a hawk is between 13 and 20 years. Their colors are usually reddish brown or grey. Their distribution is very wide, although they prefer open areas such as deserts and fields, due to the fact that they might find their prey more easily. Hawks live on lizards, rabbits, mice, fish, squirrels, smaller birds and snakes, among other animals.

The reproduction pattern of the hawks is different than that of most birds. Prior to the mating season, both males and females will prepare the nest. They will continue to prepare it for the eggs during nesting season after they have mated. Five eggs are laid one year after the actual mating and they will hatch one month later, being cared for by both parents in the meantime. The young hawk will leave the nest at six weeks old and will be able to hunt on its own and live as an adult. Only some species of hawks mate for life. 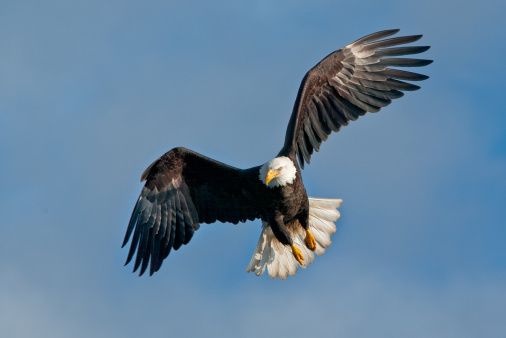 An eagle is a bird of prey of the Accipitridae family. There are about 74 species of eagles, 60 of which can be found in Eurasia and Africa and 14 on the American continent and in Australia. They are large birds, their size ranging from 15 to 40 inches in height, with a wingspan of 27 to 98 inches. The most popular type of eagle, the American symbol, is the bald eagle, a species with shiny white feathers on its head and black feathers on the rest of its body. Other eagles may be brownish and golden.

One of the most impressive features of the eagle is the speed with which it can soar. Its hunting habits are just remarkable. The eagle has very strong feet called talons. Without even stopping, the eagle can snatch even bigger prey and carry it through the sky for long distances with the help of its very strong feet. Talons take a few years to grow, making a clear difference between the youngling and the adult.

When killing its prey, the eagle will bite it at the back of the neck then swallow it whole. An eagle’s beak is made out of keratin and it keeps growing all through its life, just like human nails and hair. Being such a large animal and with its ability to fly really high, the eagle has very few natural enemies, being pretty high on the food chain.

As far as family life goes, eagles are said to mate for life. Females place their nests extremely high up and lay two eggs. These nests are called eyries. Of these two eggs one of the hatchlings will usually be stronger and kill its sibling. The strong sibling can live up to 30 years.

So what is the difference between a hawk and an eagle?

Both of these birds are raptors and they live in areas where their prey is available. The main difference between the two is in size. Despite the fact that there are various species of both hawks and eagles and that they vary in size, it is still obvious that eagles are considerably larger. And since strength comes with size and eagles are bigger, it is easy to conclude that the eagle is stronger than the hawk. Otherwise, as far as taxonomy goes, they are both part of the same family, the Accipitridae.

They are both really swift fliers and great hunters with strong beaks and talons. However, hawks go for smaller prey, while eagles can hunt and pick up larger animals. Hawks have been domesticated and used for hunting, unlike eagles which are more difficult to manage. Both hawks as well as eagles are symbols of greatness, courage, intelligence and achievement.

As far as mating and social behavior is concerned, eagle females can only lay two eggs at a time, whereas hawk females can lay five, even up to seven eggs. Hawks are more likely to flock as they have more chances of survival when they do. A group of hawks is called a cast. Eagles, on the other hand, use the heights at which they can soar and their size as a natural means of protection. Even so, they still get together in groups which are called convocations.