Difference between Neurons and Neuroglia
By Theydiffer - April 6, 2016

There are various kinds of cells present inside the human brain. In this article, we will examine the differences between two types of such cells- neurons and neuroglia.

The neuron is a fundamental unit in the neural system of humans.

Neurons have the metabolic machinery characteristic to somatic cells of other types. They have a nucleus and all other organs that are necessary for a normal cellular life.

Yet, in some other respects, neurons are distinct:

The structure of a neuron:

1. Input zone, which consists of:

2. The conducting zone of neurons includes axons, which are plasmic extensions that allow neurons to generate electrical signals, which are known as action potential. Axons can be from several nanometers in length to up to half a meter, extending through a whole body. Action potential propagates from the cell body towards the terminal ending of the axon.

3. Output zone. At the ends of the axons, there is a synaptic terminal, which consists of synapses. They can be viewed as specialized contacts that allow one neuron to transfer the signal to another. 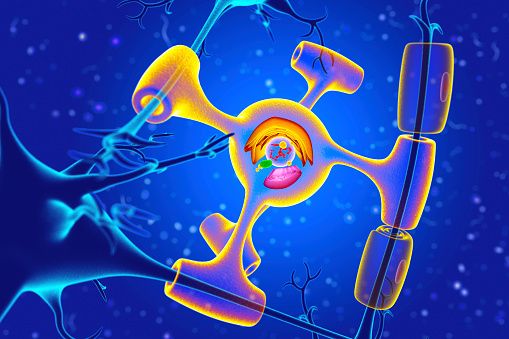 Neuroglia, or glial cells, are sometimes also referred to as glia. They provide a variety of functions for  brain tissue. They support the metabolic and signaling functions of neurons.

Certain types of neuroglia are specialized in making myelin, of which the myelin sheath consists, and which serves as an insulation around axons, aiding significantly the propagations of electrical signals along axons. You can see the myelin sheath on the first picture with neuron structure.

Neuroglia also contribute to the organization and formation of a barrier between the blood and the brain.

The other function of neuroglia is participation in creating an inflammatory response in injured neural tissues, including phagocytosis of cellular debris.

Yet other kinds of neuroglia are responsible for the formation of scar tissue which is a response of the brain in case it or the spinal cord is damaged.

What is the difference between neurons and neuroglia?

Neurons are organized in circuits, while neuroglia participate in the formation of these circuits and in a variety of forms of synaptic plasticity (these processes are being investigated by a relatively new field of studies in neurobiology).

Neurons are surrounded by extracellular fluids, while neuroglia help maintain the ionic balance of these fluids, which is crucial for the capacity of the neurons to generate and maintain the electrical signaling.