Difference between Potting Soil and Garden Soil
By Theydiffer - June 29, 2016

Anyone considering setting up a beautiful garden and potted plant gardening must become more familiar with some of the secrets of the trade. One question such a person might have for a pro would be whether to use potting soil or garden soil. What does this mean and what is the difference between the two? 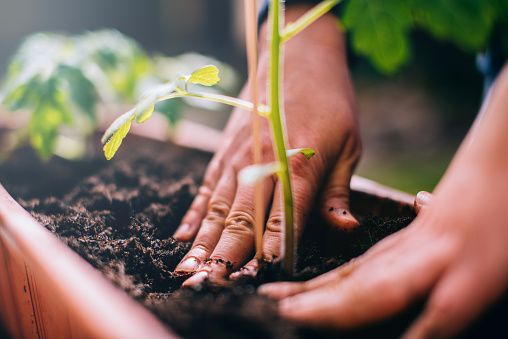 Potting soil, also known as potting mix or potting compost, is a soilless medium created for growing plants or herbs in a pot. The mix is made out of peat moss, bark, sand and perlite or vermiculite. Peat moss provides great moisture and good air space for the plants’ growing roots. Perlite and vermiculite are also meant to provide air space inside the pot and to keep it light. Bark provides anchorage and adds nutrients to the mix. Every bag of potting soil is sterilized and free of any weed seeds or fungi. They may have more or less fertilizer, depending on how you intend to use the mix.

Garden soil is a mixture of 50% organic products such as compost, leaf mold, sand, silt and clay, and other ingredients which keep the plant well fed and well fertilized. It is designed to reproduce the already existing environment of the dirt in your garden. These mixes can have amendments of compost and fertilizer and choosing the right product will also depend on what has been used in the area before so as to keep a balanced soil pH of 6 or 7.

Garden soil should only be used in the garden as it is intended to compact and keep roots together as they grow, and it provides the right moisture levels for the exterior. When used in a pot, garden soils remains too moist and it induces root rot.

So what is the difference between potting soil and garden soil?

Anyone taking up gardening must know that the type of action taken dictates the type of products for use. In this case, the name is the best indicator of what goes where. Potting soils must be used for pot plants and not in gardens as they are good for keeping moisture in a small container, but they end up drying out in the garden. On the other hand, garden soil should be used in the garden as it is intended to maximize the life of outdoor plants. Mixing the two might affect the life of the plants.