Difference between Whales and Dolphins
By Theydiffer - July 21, 2016

You know what being a “cat person” or a “dog person” means. But is there such a thing like being a “whale person” or a “dolphin person”? And can people other than marine biologists have clear preferences for one or the other? Well, first things first. What is the difference between whales and dolphins? And then you can start taking sides. 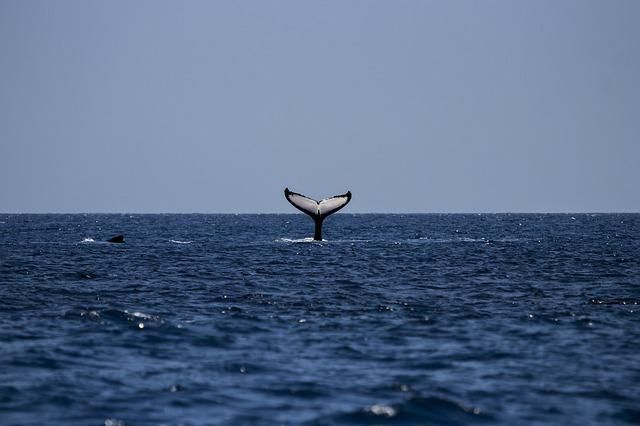 Whales are, first and foremost, the biggest mammals on Earth and the biggest marine creatures. They are part of the Cetacea infraorder and are creatures which have adapted the most to life in the ocean. Their closest living relatives are the hippopotamuses, the two species having diverged 40 million years ago. Whales are split into eight extant families grouped into 40 different types of whales and 76 species.

As Cetaceans, they are split between toothed whales (Odontoceti) and baleen whales (Mysticeti). There are 66 species of Odontoceti whales. To name a few of the most popular whales to fit in this category: orcas, beluga whales, narwhals, dolphins, sperm whales, porpoises. These are smaller in size and they hunt using their peg-like teeth to catch various marine life and mammals. There are 10 species of Mysticeti whales and these are the biggest ones. They have comb-like teeth which they use to separate food from water. They usually have two blowholes, easily explained by their considerable size. To name a few of the most popular whales in this category: blue whales, humpback whales, gray whales etc. With so many species it is difficult to make up an average life span. However, the shortest documented period is of 20 years and the longest is of 100 years.

As mammals, whales breathe air into their lungs through their blow holes, are warm blooded, have four-chambered hearts and have mammary glands to nourish their young. Their sizes range from 8.5 ft long (the adult dwarf sperm whale) to 94 ft long (the adult blue whale). Their bodies are hydrodynamic and fully adapted to life in the ocean and swimming. They have tails and fins to help them move.

Whales reproduce once every 1-3 years. They usually breed in warm tropical waters. The gestation period is of 9-18 months. Males bear no responsibility for protecting the young. Once the calf is born, the mother feeds and protects it for about one year. This is the strongest social connection among Cetaceans. Otherwise, they have really tight social ties. A group of whales is called a pod.

As far as human interaction goes, whales are usually spotted while performing various water activities which are amusing seen from above the water. They jump (breach), spyhop (poke the head out of the water then slide back in), lobtail (stick their tail out of the water and slap the water surface). At other times they float motionless near the water surface or blow water through their blowholes.

Whales have been hunted by man since 3000 BC and in the 17th, 18th and 19th centuries whaling took on a commercial nature. They were hunted for oil, blubber and meat. One of the greatest novels of all times, “Moby Dick” written by Herman Melville, is based on the revenge story of a sperm whale as it is remembered by the sole survivor of a whaling ship. In 1986, the International Whaling Commission banned commercial whaling. Countries relying on whaling, such as Japan, Norway and Iceland, are trying to get the ban lifted. 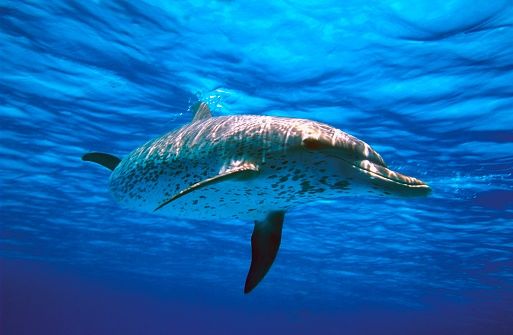 Dolphins are fully aquatic mammals, part of the Cetacean group. There are about 43 extant species of dolphins, comprised in 4 extant families. 38 of them are marine species, whereas the rest are river dolphins. Their closest living relatives are the hippopotamuses, with which they split 40 million years ago. Although they prefer warmer climates and waters, there are also species of dolphins to be found in cold regions.

As far as size is concerned, they can range from 5.6 ft long (the adult Maui dolphin) to 9.5 ft long (the adult killer whale). The average lifespan of dolphins in the wild is of 17 years. Some dolphins have been documented to have reached the age of 50. Their bodies are slender and they are very agile swimmers. Their tails are very strong. Apart from the pectoral fins, there is also the dorsal fin which helps them move through water with even more speed. They also have a beak, cone shaped teeth and one blowhole.

As mammals, dolphins are warm blooded, they breathe through their lungs and they feed their young through the production of mammary glands. They do not lay eggs. They reproduce once every two -three years, although males may have several mates during this time and take no part in protecting their young once it is born. Calves stay with their mothers for a long period of time.

Being part of the toothed whale group, dolphins will eat squid and other small marine life, along with larger mammals such as seals. The way in which killer whales may also choose to play with their food before eating it is renowned. Two orcas may “volleyball” a seal’s body before eating it. Also notable is the fact that, although they have teeth, dolphins will swallow their food whole if small, or will tear it to pieces then swallow it, when it is bigger.

Dolphins are seen as very playful and intelligent mammals. Their water activities are looked forward to by people going on cruises. They will splash the water with their tail, spyhop and breach. They can also blow water through their blowholes. Trained dolphins can perform a lot of tricks, such as jumping through hoops, lifting a human on their beaks and even giving them a ride. Listening to dolphins communicate through echolocation with whistles and clicks is another one of the activities enjoyed by humans.

Their interaction with humans has not always been of the positive kind, as annually many dolphins die trapped in tuna fishing nets. Also, changes in the climate and in their habitat are severely affecting dolphin populations all over the world.

So what is the difference between whales and dolphins?

The most important thing to take away from this comparison is that the dolphin is a type of whale. They are both members of the Cetacean family and as such they are both closely related to the hippopotamus. The dolphin is one of the species of toothed whales. Consequently, it is a mammal, like the whale. Their social behavior is more or less the same. The females are the only ones responsible for the lives of the young, whereas the males play no part other than the breeding. The bond between mother and calf is very strong in both cases.

As a toothed whale, the dolphin will communicate through echolocation, meaning whistles and clicks. They are both very playful, but the dolphin, having a size which allows captivity, can be trained to do various tricks. Being smaller, dolphins are more agile and their bodies are better adapted to fast swimming. As far as profitability goes, baleen whales were seen as very valuable for their oil and blubber, mainly due to their size.