Difference Between Rhythmic and Artistic Gymnastics
By Andrew Parker - January 29, 2022

Some sports are very easily distinguishable: football is clearly different from soccer, and basketball is obviously not the same thing as volleyball. But what about rhythmic gymnastics and artistic gymnastics? Both have similar names and rules – but are certainly not the same sport. Don’t worry, you’re about to learn how to differentiate these two disciplines. 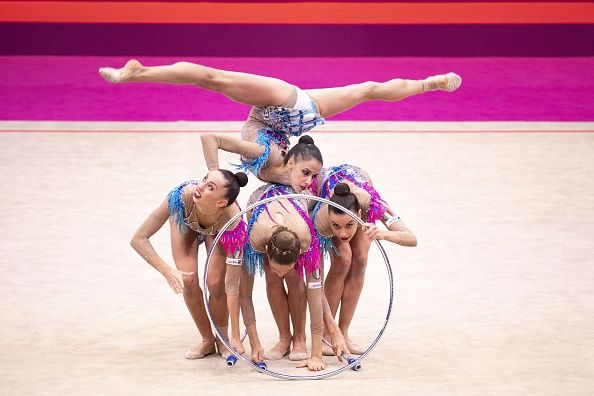 Rhythmic gymnastics is a sport defined by presentation and style.  Athletes extend their movements using ropes, balls, and ribbons while performing in synchronicity to music. When it comes to the Olympics, only female rhythmic gymnasts compete in event, and their scores are based on elements such as body language, synchronicity with music, and use of space are taken into consideration.

Artistic gymnastics is less about style and more about precision and strength. Using set apparatus such as parallel bars, horizontal bars, and uneven bars during their performances, athletes climb, balance, and flip to show off their skills and strength. Artistic gymnasts are scored based on their skills, movements, and ability to combine different skills into multiple movements.